Do you ever get on your bike and have a fantastic, amazing, super awesome, best, ride-I-have-ever-had day?  The kind of day you wish you could replicate over and over every time you get on your bike??  Sure you have!  This day you had tons of energy and power and were completely fearless.  The ride could have gone on forever and you would have never gotten tired.  Your body was a primed machine.  You think to yourself, “Too bad this isn’t race day”!  Afterward you think back to everything you did leading up to that ride and try your best to duplicate it.  Eat the same foods, get the same amount of sleep, wear the same pajamas to bed the night before (oh yes I did).  Alas! Disappointment!

I have had a few days like the one I described above.  I thought I could conquer the world.  I was riding around with a stupid grin on my face that just wouldn’t go away because I was having fun and going fast.  I have nicknamed this feeling “The Wonder Woman”.

If you are not familiar with Wonder Woman I will explain.  Wonder Woman  is a fictional superhero appearing in American comic books and cartoon shows.  She is widely considered a feminist icon.  She is gifted with a wide range of superhuman powers and superior combat and battle skills.  She possesses an arsenal of weapons including the Lasso of Truth, a pair of indestructible bracelets, and a tiara which serves as a projectile weapon.  Wonder Woman can also heal faster than a normal human being, has superhuman strength, ESP, and telepathy. Here is a picture: 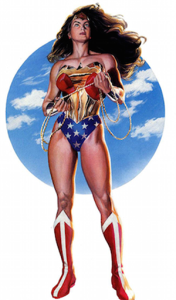 After much research on how I might be able to duplicate this wonderful feeling I have learned something very important – IT SHOULDN’T BE DUPLICATED.  You see, this “feeling” happens when my body is having a hormonal imbalance. 🙂  Usually, about a week before menstruation when hormone levels are at an all-time high.  There isn’t a way for me to duplicate that.  No amount of wearing the same pajamas to bed will make me magically wake up tomorrow in the same mood as today; and as I have come to learn, I shouldn’t want to.  While I am flying high on an endorphin and adrenaline rush of fast, fun times, my friends and teammates are behind me suffering.  It’s just not nice!  It wasn’t intentional and it took a couple times for me to realize what I was doing.  I was having a great time – they were not.  I have also been on the back side of the hormonal swing.  Feeling super tired and drained for no good reason.  Mentally wanting to go hard but body refusing to cooperate.  Falling off the back of the group and riding back to the car alone.  Defeated.  It’s a hard place to be in.  You know you’re better than that.  You have put in the work and the time and just don’t understand what went wrong today.

As a cyclist we need to be sure we are all supporting each other.  Not just with empty words but with kind actions as well.  I have learned so much about myself riding my bike and it’s a joy to be able to share it with others.  Every single one of us will need some support at some time.  Whether it’s a CO2 cartridge on the side of the road, maybe a water refill in the middle of a long ride, or just a friend to chat with while training.  We are all human and will make mistakes, but learning from them is what makes us better people and better teammates.

If you wake up and feel like Wonder Woman God willing this will be a race day. LOL  If not, perhaps it’s best to ride alone.

I work in sales and customer service and am a busy mother of two. I got hooked on cycling after a friend invited me to go for a ride on the Katy trail. After that ride I entered a couple charity rides before seeking a new challenge and dove into the wilds of racing. I am excited to start my third full season of racing and can’t wait to continue to learn and ride with the best racers around.