Sometimes The Best Plans are the Ones You Don’t Make

The 2014 cycling season came to a close for me with a thud. It was the last race of the season, Benton Park. I think I was just a little too excited to JRA during the off season and somehow missed a manhole cover, or rather did not miss it. This was the second year in a row that my cycling season had ended in this fashion. A flare for the dramatic you might say??? I digress, despite the fractured elbow and concussion it was a really fun season. Since I was unfortunately acquainted with the injury and healing process, second elbow in two years, I had a pretty good idea of what to expect. Trainer, trainer, trainer and then lots of slow riding outside after that. I kept at it though. I mean who doesn’t have obstacles to overcome, mine are certainly no different than most of the women I ride and race with. We all have jobs, families, friends and we all find the time to train. Of course there are days when I simply don’t want to ride, I am sure I am not alone in this, but we do it. But then there are the days when there is nothing else that I would rather do. I count down the minutes until I can leave work and get out on the bike and just let go.

In March I got married. I won’t go into all the details but it was one of the best days simply put. I spent much of the spring preparing to race in the Joe Martin Stage Race. This would be the 3rd year there but it was going to be dramatically different this time. We were going to be in the Pro 1/2 race this year, a UCI event no less. Talk about scared out of my mind.  It was going to be such a big jump in the level of competition. We would be racing with some of the pro women I have heard about but never raced against, unless you count the few crits including the aforementioned thud race in Benton Park. But those were all crits, so in my book it didn’t count. Crits are not my favorite type of race. But stage races with a TT and a Road Race, yes please. Anyway, I just really wanted to have a good race at JM, at least show that I am able to race at that level. I had no ill-conceived notions that I would be winning or making a top placement. I just didn’t want to suck.

Well I sucked. 😉 Okay, it was not a simple case of just performing terribly but things leading up to the race certainly did not go according to plan. I got sick, really sick about a month before. I had some kind of virus, took a few days off hoping I would be on the mend and then bam, Strep throat. More time off the bike including a week off leading up to the race. NOT RECOMMENDED. Needless to say I was even more nervous and pretty bummed. All of my training leading up to the race prior to getting sick had been going so well! Again, it happens to all of us where things just don’t go according to plan but you deal with it. I didn’t have the race I wanted to and I did seriously consider not going but I am really glad I did. I learned a lot about myself during this race. I learned that as part of a team you show up. You may not be at your best but you just show up. I learned that you give it all you have and you smile when you cross the line even if you miss the time cut by 3 minutes. I learned that you have to accept the cards you are dealt with, even if it is a hard lesson to learn. I learned about the type of rider I am and the type of rider I want to be.

The rest of the season was pretty awesome. For the first time I was able to walk away from a crash, get back in the race, and finish with my friend and teammate Anina when she won the Illinois State Championship Road Race. So even though the crash was not part of the plan it turned out to be a fantastic race.  Things were wrapping up nicely. Then one of coolest things happened, but I’ll get back to that here in a second. 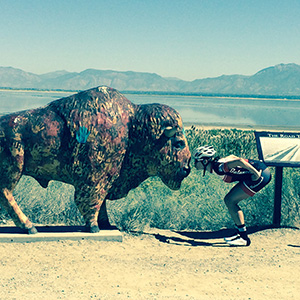 If someone were to ask me what I love the most about cycling, it would be the community. It is pretty small compared to other communities. Especially for women. When you start out as cyclist it can be pretty intimidating. Cycling itself can be scary, dealing with cars on the road, it can be a dangerous sport. So when you find a group to ride with, especially a group of women, it makes conquering fears and insecurities so much easier. The encouragement you get from a fellow female cyclist can truly be inspiring. As I said earlier, one of the coolest things happened to me the week before my final race of the season. My friend Lisa Glad, another female cyclist from the St. Louis area, sent me a message asking whether I was planning on going to Masters Nationals to compete in the Time Trial. I said no because I was not eligible to race. It had been my understanding that I was in that void where I had no place to race. Too young for Masters, too old for the U23 amateur division, and not on a UCI team for the Pro division. I was incorrect as it turns out and had it not been for Lisa I would have never known that I was indeed eligible to compete in the Masters 35-39 division. I was not sure I would be able to go. Bike transportation, timing, and the overall cost were all going to be a challenge. Like I said before, the cycling community here in Missouri is pretty amazing, had it not been for this community I would not have been able to go. I owe a huge thanks to Lisa for encouraging me to go for it, for picking me up at the airport and sharing her lodging. I also owe Dana Braet a huge thank you for transporting my bike all the way to Utah and helping me get the bike race ready. I could not have done it without his help. I want to thank MOBRA for helping me with some of the cost. The support I received from my team Balanced, MOBRA, and all the people who encouraged me they are the reason I had the opportunity to compete at a national level.

At the start of the season I would never have guessed I would wind up in Utah to race, it was certainly not part of my plan. I never could have imagined that by riding a bike I would have found a community of people and a group of friends like I have, but that is exactly what happened. Racing has opened doors for me that I was unaware of. I have traveled and met amazing people. I have pushed myself in ways I never thought possible. Ultimately it has transformed my life. 2015 turned out to be pretty amazing for me, and I am excited about what lies ahead, whether it’s part of the plan or not.

I am a graphic/web designer who loves running, swimming and other outdoor activities. I was introduced to cycling after deciding to attempt a triathlon. After competing in several local triathlons, I decided I really enjoyed the bike portion, and wanted to try focusing on cycling. I enjoy riding with other local cyclists and love being part of an organized women’s team.